'Priory Pirates' race down the River Medway for charity

'Priory Pirates' race down the River Medway for charity

Members of staff from Priory Adult Care's Sapphire House took to the water for a raft race this weekend to raise money for charity. Sapphire House is one of our specialist residential services based in Maidstone, Kent. The home provides support for individuals with autism, learning disabilities, mental health needs and complex needs.

Staff took part in the gruelling 650m journey down the Medway River, from the railway bridge to the Archbishop’s Palace, on a home-made raft. The ‘Priory Pirates’, consisting of four members of staff from Sapphire House, were one of the 12 teams who took to the river for the event.

The race was part of the Maidstone River Festival, an event which has been running for 42 years now. The occasion is now a local tradition, and is attended by thousands of members of the local community.

“This is a great family day out, showcasing the beautiful River Medway and bringing together the whole community,” said David Naghi, who is the Chairman of the festival.

Staff member Ami Baker came up with the idea to participate in the event, with the aim of getting residents at the home involved in a community event. She said,

“We want to break the stigma about the people we support. They’re just as much part of the community as we, the staff, are.”

Ethan Ryan was one of the staff members who bravely took to the raft for the race. He said, “It was nice to get Sapphire House noticed. We’re a bit out of the town area, and for us it was nice to advertise what we do.” He also noted that he felt it was important to find ways to engage residents in meaningful activities, where they could really get something out of the experience.

As part of their participation in the Maidstone River Festival, the team worked hard to fundraise for local charity Heart of Kent Hospice, which provides care to people living with a terminal illness. The team's efforts resulted in donations totalling £430 for the hospice.

On the day, the teams of rafters competed for one of three trophies: Fastest Raft, Best Dressed Raft, and Most Money Raised. While the Priory Pirates took to the water for the race, everyone else in the house, including residents and staff, eagerly cheered along. 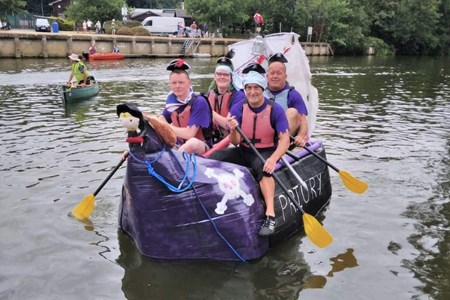 The team's valiant efforts didn't go unnoticed, with the Priory Pirates winning the award for the Best Dressed Raft. This was awarded by Sarah Bowes, the Head of Community Engagement at Heart of Kent Hospice. The trophy was presented by the Mayor of Maidstone, and will be proudly kept on display right in the entrance to Sapphire House.

In the weeks leading up to the race, staff at Sapphire House had been working with residents at the home to design and build the raft. One of the residents at the home had come up with the brilliant idea to fashion the raft like a pirate ship, resulting in the ‘Priory Pirates’ name. The raft was built using materials donated from staff member’s families, making it a real community effort.

All service users took part in the making of the raft, all the way from helping with the construction to decorating and perfecting the finishing touches. The raft was named ‘Mandy’ by one of the residents, to honour Amanda Waghorne, Operations Director for South Central. Mandy was there on the day to provide moral support and enjoy the festivities along with service users, the staff team, and their families. She said,

“I was very proud of the staff team at Sapphire House; they put so much effort into it, especially with getting the residents involved. It was a really great team-building exercise too.

The fact that money has been raised and is going to a worthy cause is lovely.”

“We aimed to show that our line of work can be fun and rewarding for staff and service users, and promote those with additional needs being part of the community.”

Residents and staff alike were thrilled at the results, and are already planning their entry for next year’s Maidstone River Festival raft race.

For more information on the specialist services Priory Adult Care can offer, please call the enquiries and referrals team on 0808 159 3137 or click here to make an enquiry.